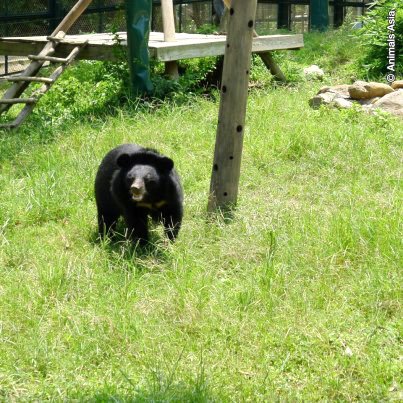 Quang Thien bounds across the grass of Animals Asia’s sanctuary in Vietnam.

Authorities were able to confiscate her from a bile bear farm because she had not been microchipped, which is required by law.  Her front left paw is missing, so it’s likely that she was illegally trapped in the wild and then sold.  Her life at the sanctuary is a far cry from her existence in the tiny cage where she was kept imprisoned at the bile bear farm.  She loves being free to run and play with her bear friends. But the Sanctuary and her newly found happy life are now in danger.

104 bears rescued from bile bear farms and the wildlife trade, who were given sanctuary seven years ago, in 2005, at the Tam Dao national park in northern Vietnam, at a beautiful center run by Animals Asia, are now under threat of eviction by Vietnamese authorities.

You can help by writing a letter to the Prime Minister of Vietnam, asking him to intervene on behalf of the bears.  The link is below. 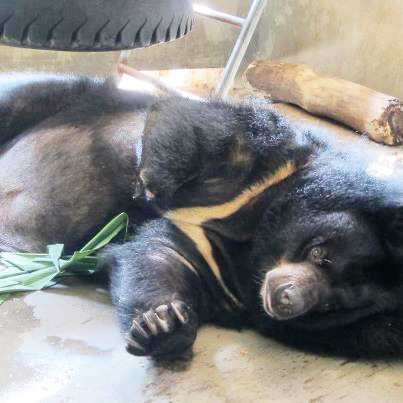 Maple first arrived at the sanctuary almost a year ago, in December 2011, after a long trip from a bile bear farm in South Vietnam. Her many years in a cage and a horrible diet had left her badly overweight, and she had infected teeth.  Still traumatized from her treatment at the bile bear farm, she cried non-stop.  When she was moved into a den at the sanctuary, and given lots of space to move around in, over time, she became calmer and stopped crying.  Now she’s gotten back into shape, has made friends, and is regaining her health and her enjoyment of life.

Animals Asia,  the Hong Kong based organization founded by Jill Robinson that has a reputation as one of the best-run wildlife centers anywhere in the world, expanded their operations from China to Vietnam in 2005, with the generous cooperation of the Vietnamese government, who provided 12 hectares (29 acres) of the Tam Dao national park to be used as a sanctuary for 200 rescued bears.

Animals Asia also worked with authorities to have the extraction of bile from bears declared illegal in Vietnam, which was a major step. Due to a loophole in the law, however, which allows bears to be kept on the farms as tourist attractions, the use of bears for bile, which is part of traditional Chinese medicine, still persists. (Many practitioners of traditional Chinese medicine have also condemned the practice.) The process of extracting bile from bears is, in itself, extremely cruel, and means long-term suffering for the bears.

So far, in ongoing rescue operations, 104 bears like Maple and Quang Thien, have been rescued from Vietnamese bile bear farms and now live and play at the sanctuary.

Rescuing these bears has been an ongoing process, undertaken with the help of authorities, and it is only possible for bears to be confiscated if there is a place where they can go and be cared for.  So the closing of the bear sanctuary would also be a severe blow to future efforts to save the 4,000 bears still being kept on bear farms. Bears who have been on bile bear farms can be rehabilitated to enjoy a good quality of life, but they always require lifetime care and cannot be released back to the wild.

Luca arrived at the sanctuary in 2010, with a large group of rescued bears.  He suffered from repetitive head-swaying, which is a form of the kind of stereotypical movement that can be observed in animals in confinement, sometimes in zoos.  It’s a bit like PTSD in people.  Even after he was housed in a roomy den with two bear companions, the head-swaying didn’t stop.

Earlier this year, Luca was moved to a new enclosure where he found a new bear pal, a wrestling buddy, and now that he’s relaxed and at ease, the head-swaying is nearly all gone.

It’s important for all these bears, who’ve spent months or years in rehabilitation and who’ve begun to enjoy life again, that they be able to stay in the sanctuary that is their home, and it’s important for Vietnam to continue the humane course of action that they embarked on, of saving and protecting the bears. It is essential for any government to honor their commitments and to protect the wildlife of their country.

To speak up on behalf of the bears, please email the Prime Minister of Vietnam, Nguyen Tan Dung. To do this and to see a sample email, click here.

One thought on “Vietnam: 104 rescued bears under threat”