Viraf and Vijay, with Olio

The last two months has witnessed far too many arrivals of Olive Ridley turtles on the shores of Mumbai. Two of them have been admitted in serious condition at Thane SPCA. Both were severely mauled …leading us to believe that they might have been victims of black magic. We had our third visitor four days back. By far the largest one admitted ( 70 kilograms, 154 pounds), and comparatively the healthiest with only some light bruises on his shoulder; Olio stayed with us for some light medication and dressing. Due to severe shortage of space we had to keep her – yet again – in a 500 litre Sintex tank, used previously by her fellow species patients, Oliver and Olivia.    In four days her wound almost disappeared, and she was ready for release. During her stay our staff sourced sea water from the local creek in plastic bins, 120 litres at a time every day, to ensure that she was submerged in saline water throughout.

Prior to release our surgeon, Dr. Kiran Shellar, wanted to be sure about her swimming ability, something that has been in his mind since the rescue as to why Olio was washed ashore in the first place. Since there was no way she could swim around in the tank, we searched for two days for a children’s pool or someone’s bathtub, till we realised our member Yatin Mhatre had a small pool in his house where we could test her swimming.

Olio was carried from the hospital to Mr. Mhatre’s home, where she showed our surgeon and the Forest officials present, what a champion swimmer she is. Now she was ready to go back home.

Here was the most difficult situation facing us. Being a Schedule I species,  we needed to co-ordinate with the Forest Department to be present during the release, and the Police for crowd management as well as allowing us entry into any high security areas. Choosing the spot for the release entails thorough research. The mode of transportation and time of release is of vital importance.

A persistent supporter of our work, Mili Gandhi, with her indomitable enthusiasm and knowledge of animals, did all the spade work. Through her we came to know of Mr. Viraf, who as a member of the Yacht Club, arranged for a sail boat, since a motor boat would make too much noise which would disturb the animal.  Mr. Viraf and his friend were kind enough to let us use two of the boats. Mili and Viraf made detailed studies of the exact location for the release where the sea would be at its deepest and which is not frequented by fishing trawlers or fishing boats. The team which was on standby to go out was instructed on the dress code and other essentials. 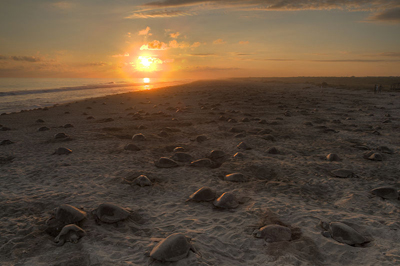 Olive Ridleys nesting on the beach at Oxaca, Mexico

On November 24, 2011 our ambulance reached the gateway of India at 3 PM. It was carrying Olio in a Sintex tank filled with saline water. When we arrived, we contacted the Police officials stationed there for help. Immediately they deputed a large group to stand around the ambulance till Olio was ready to be shifted. At 3:30 PM, as the winds became favourable, she was shifted from the tank onto a blue tarpauline and with the help of the Forest officials, our staff, and some tourists she was carried to the boat. We had to change boats a little further on. Alan and Debashish did the photography from the second boat, while the rest were with Olio in the first boat for the release.

Olio was a little restless while in the ambulance (she traveled over 100 kilometers, 62 miles, from our hospital in Thane to Gateway of India ) and while being carried to the boat. But Mr. Viraf writes to us : ” Olive was frisky initially, but once we set sail he was as calm as the winds. We opened up the sheets and he (or she) was at complete ease in the boat and would occasionally stretch his neck high and eyes wide open, as I am sure the feeling of the sea breeze made him feel at home. ”

It took the team 50 minutes to reach the spot of release. As our hospital helper Vijay opened up the wraps of the tarpauline, Olio dove straight into the sea, bobbed up once, looked around and disappeared forever.

We would like to especially thank the Yacht Club for allowing us to use their sail boats, Mr. Viraf for the smooth co-ordination of the release, Alan and Debashish for their photography and videography, The Mumbai Police not just for providing us Security, but  also for treating us to hot tea when we most needed it, the Range Forest Department, Thane and Range Forest officer Shri Singh, Mr. Mhatre for keeping vigil on Olio for a day and night by her side at the pool, Mili Gandhi for letting us exploit her time and brain and last but not the least Thane SPCA staff members who fed the Ridley with their own hands, hauled saline water physically from the sea and took turns to keep her moist for four days without a break.

After all this, Olio owes us hundreds of babies somewhere and to be smart not to get caught or washed ashore again. 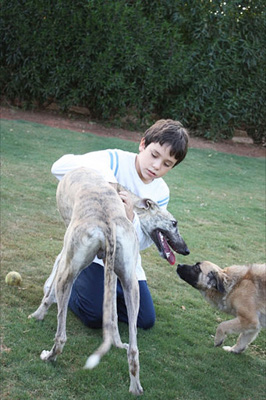 MaKus, with Cisco, and his dog friend, Antonio

“Ten months after having been rescued from a terrible situation near Seville, Spain, MaKus is being adopted!” writes Barbara LeFranc of “Le Bulletin des Levriers”*

*A “levrier” is a Spanish greyhound.

“I’m inspired by nature, and very much by nature that lives so close, as does this Tawny Owl, only yards from my studio. For me she represents freedom, with all that brings to her as a wild creature.” Rob Parkin

To see more of the artwork of Rob Parkin, click here.