news from (and about) the trees

Wolverines making comeback in Washington – the state transportation department is spending millions on crossing structures, both over and underneath busy I-90, which will allow the animals to expand their range, which will give them greater mating options and genetic diversity. The crossings would likely also restore connectivity for the Cascades’ northern and southern black bear populations, which haven’t been able to mingle or mate easily for decades.

Read the full text of these stories at my website. http://laurajmerrilltreetalker.com

Scientists Seeking to Save World Find Best Technology Is Trees – Oxford University scientists, who considered methods ranging from capturing emissions from factories and power stations to extracting carbon dioxide directly from the air, and adding lime to oceans to increase their absorption of the gas, released a study which determined the best technology to suck carbon dioxide from the atmosphere and try to reverse global warming is trees. (Duh.)

This video is about long-eared owls.

Vroege Vogels TV in the Netherlands reports that this year, more long-eared owls than ever have been counted in Friesland province. 1740 owls at 143 resting places. Last winter, there had only been 800 birds.

Extremely probably, this is because 2014 has been a good year for rodents. Other owl species have profited from this as well. 90-95% of long-eared owl food are common voles. In a bad rodent year, they eat some small birds as well.

This video is called Birds of Panama – Episode 1.

And this video is the sequel.

Bay of Panama saved from destruction

“There’s no way we would have been able to get to that day by ourselves…” writes Rosabel Miró, Executive Director of Panama Audubon Society in an emotional written message to the rest of the BirdLife Partnership. “We need to heal our wounds and show to our friends that are going through similar situations like the ones we went through, that it is possible to achieve your goals. We found strength in unity.”

Panama Audubon Society (BirdLife in Panama) is celebrating after winning a hard-fought effort to reverse the Panama government’s 2012 decision to withdraw protected status for the Bay of Panama Important Bird and Biodiversity Area (IBA), a site of international importance for migratory birds. Its protected status had been pulled because of short-term economic pressure for urban…

This video says about itself:

First image record of a tiger family in inland China!

This gives us great hope for tiger recovery in inland China!

WWF camera trap captured a video of a tiger family – a female tiger with 2 naughty sub adults – in Wangqing Nature Reserve. Wangqing Forestry Bureau is the first in-field working site of WWF-China on tiger conservation. WWF has been working there for 7 years on prey recovery, anti-poaching and local community development.

This gives us great hope for tiger recovery in inland China!

Last October, an animal appearing to be a gray wolf showed up on the Kaibab Plateau in Arizona, just north of the Grand Canyon National Park. At first, no one was sure what, exactly, the “wolflike animal” was, but if, as suspected, it was a gray wolf that had migrated from the northern Rockies, it would have been the first time since the 1940s one had set foot in the Grand Canyon. Although there were once an estimated 2 million gray wolves across the continent, humans hunted and poisoned them to the point of oblivion. But thanks to federal protections under the Endangered Species Act (ESA), since the 1970s, gray wolf populations have slightly rebounded…

A whale finds its way out to the open sea…

This video is about the young humpback whale, swimming in the Oosterschelde estuary in the Netherlands last weekend.

Translated from NOS TV in the Netherlands:

“Humpback swam back out to sea’

The humpback whale seen this weekend in the Oosterschelde estuary is almost certainly back in the North Sea. Cyclists on the storm surge barrier have seen this afternoon that the animal swam out, says the foundation SOS Dolphin.

Earlier today things still looked bad for the whale. It swam in the east of the Oosterschelde and it was questionable whether it could find the “exit” again and whether it would dare. After 14:00, the animal was not seen.

But tonight, Jolanda Meerbeek of SOS Dolphin got a liberating phone call from a family who had cycled over the flood barrier. “At the first pillar they saw a meters long animal swimming out. It was…

This 2014 video is about baby loggerhead turtles hatching on Kuriat island in Tunisia.

From the Atlantic to the Mediterranean, turtle conservation overcoming similar challenges

An uninhabited island with beautiful beaches might seem like a safe place for a rare species of turtle to nest, but Kuriat Island of Tunisia is swamped every summer by thousands of tourists. Even the fishermen who frequent the island to rest can be unaware that the island is very important for the loggerhead sea turtleCaretta caretta – the only place in Tunisia where this Endangered species buries its eggs in the sand. Sea turtle populations are devastated from bycatch in fishing nets so any hatchlings under the sand need all the help they can get…

– The Embassy of the People’s Republic of China in Brazzaville, Republic of Congo, has donated US$100 000 to conservation in Odzala-Kokoua National Park which will be used for the construction of a 27 kilometre road to connect the Number 2 Highway with the new Odzala-Kokoua National Park eastern s… – http://wildlifenews.co.uk/2015/02/new-road-set-to-boost-anti-poaching-activities/

There are also some other important points to consider regarding farm cost savings and higher production yields with mycorrhizae. The University of Wisconsin made a study of the effects of Mycorrhizal Applications Inc’s product called MycoApply on potato yields, profit and another extremely interesting thing about the application of phosphorus in the field. It was found that where conventional grown potatoes needed 120 lbs of phosphorus added per acre, under the mycorhizal applications to the potato fields, only 30 lbs was needed. Hence less phosphorus and more efficient mycorrhizal nutrient competition and uptake means less fertilizers. There was also an added bonus of more yield of potatoes per acre and profit by the usage of mycorrhizae into the soils. So drought tolerance, superior nutrient uptake which negated tons of fertilizers on industrial site, 200% increase in water hydration which made plants drought resistant and the added plus of less weeds…

France has declared that animals are sentient and ‘not furniture!’

The French Parliament has overturned 200 years of law to elevate animals to the status of sentient beings. Although it was already obvious to most of us, this recognition in law is an important milestone for animals. As the law begins to acknowledge the sentience of animals, recognition will grow that animals have needs and desires of their own. And one day they will gain the rights that they have so long been denied.

Thanks to the many submissions put in by you and others, New Zealand is set to acknowledge sentience in its own animal welfare legislation later this year. Find out more about animals and NZ law: http://safe.org.nz/issues/animals-and-the-law#description

SHARE if you think animals are so much more than a piece of furniture! 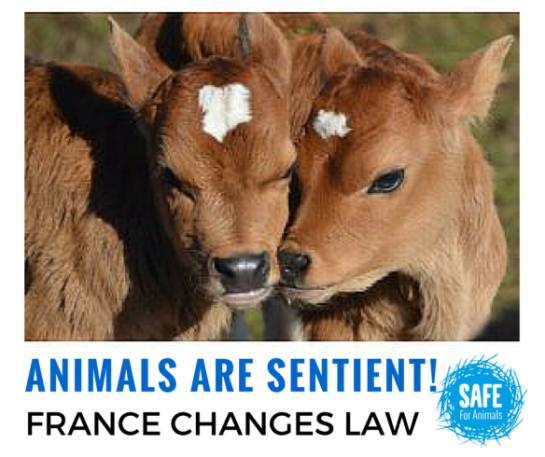 Does this mean the French, who invented and produce foie gras, will end the bizarre practice…