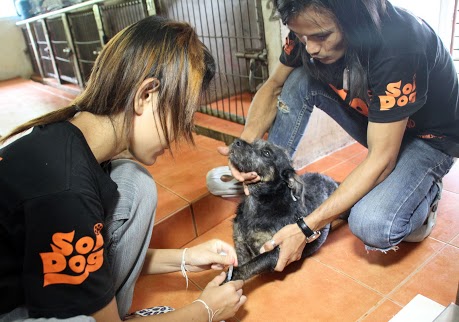 By Soi Dog Foundation – May 2013 Newsletter

Little black haired Haa Sip (50 in Thai) left his mark on history (and the vets left a mark on him!) when he became the 50,000th animal to be sterilized since Soi Dog started in late 2003. Performing the historic deed were two of our resident veterinarians Dr Su and Dr Che. Haa Sip is from Thepkasatri district in Phuket.

Mr. Dalley said: “The current mobile clinic programme on Phuket, working closely with the province’s local authorities, aims to have the island’s stray population under control in two years and to continue the province’s rabies free status.”

Soi Dog is discussing with the Department of Livestock in Bangkok introducing a national programme based on Soi Dog’s activities on Phuket. Thailand has pledged to eradicate rabies by 2020 in accordance with ASEAN agreements. Large populations of unvaccinated and unsterilized street dogs makes the eradication of rabies virtually impossible and we are hoping that a national programme can be established in the interest of both animal and human welfare.

Soy Dog dedicated this newsletter to Jeanne Marchig, a generous supporter of Soi Dog Foundation and numerous small animal charities throughout the world, who passed away in early May of this year.

Said Soi Dog Vice President John Dalley at her passing: “We at Soi Dog are extremely saddened to hear of the passing of Madame Jeanne Marchig. Through the Marchig Trust she established in 1989 she has enabled countless smaller animal charities like Soi Dog Foundation to progress and continue their work, and in 2011 she funded the innovative cat hospital that bears her name at the Soi Dog center. Also in 2011 Gill and I were very humbled to receive the annual Marchig trust award for services to animal welfare, one of the most prestigious awards in the world of animal welfare.”

We shall miss her.

To read the rest of this issue of the Soi Dog newsletter, click here. (Caution, some photos may be disturbing.)

…2012 has sped past but as in every previous year more than ever has been achieved through your support. As always it has been a year filled with both heartache and joy.

January saw the last of the dogs rescued during the Bangkok floods returned, and at Phuttamonthon (Dog Island), we fulfilled our promise to rebuild the shelter there which was destroyed during the floods.

The very sick dogs all went to Soi Dog’s shelter in Phuket. The great news is that all those dogs have now been rehomed overseas.

Domino was taken from Phuttamonthon after a supporter spotted him on a video.

Domino is an adorable, vulnerable little guy and his departure for the UK will be an emotional one.  Committed shelter volunteer Chris and Domino are especially close and Chris is already planning a trip to the UK to see him in his new home.

In June we commenced the PUP programme on Phuket (Prevent Unwanted Puppies). This ambitious programme, supported by the UK based Dogs Trust International and private donors, sees us systematically holding mobile clinics in each area of the island. The aim is to sterilize 10,000 dogs per year over the next two years, with follow up clinics in year three, which will see the dog population in Phuket under control.

A record 10,692 dogs and cats were sterilized in 2012 preventing untold misery for thousands of unwanted puppies and kittens. Sterilization remains Soi Dog’s prime objective with a target of 15,000 per year in 2013…

Ending the illegal trade in dogs from Thailand to Vietnam has been the biggest challenge of the year. Both stopping the trade and providing for the thousands of dogs intercepted by the authorities has been a huge challenge…I would like to thank the hundreds of supporters who have risen to the challenge of caring for these dogs by becoming members of the Magic 1000 club. Donations to the Magic 1000 go solely to providing food for these dogs but we must still recruit many more members to maintain supplies…

The progress made in Thailand this past 18 months is well beyond my expectations.

Thank you for your support. 2013 is sure to bring many new challenges and with your help we can meet them.

Editor’s note: To read the New Year’s message by John Dalley, of Soi Dog Foundation, in its entirety, click here.  At the end is the link to a touching and inspiring video.  (Caution, there are some graphic images at the beginning of the video.)  Hope was rescued from the dog trade and has a very happy ending. 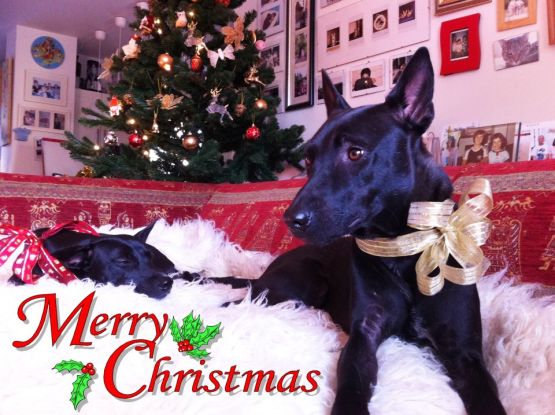 A very merry Christmas from Noddy, Sweet Pea and everyone at Soi Dog! Noddy (on the right) and Sweet Pea (napping!) were both rescued from the Bangkok floods of 2011 and will be spending Christmas in the UK with their adopters Jason and Kookie.  Sweet Pea was very ill and almost died. She spent two weeks in Bangkok’s Thong Lor Animal Hospital in an oxygen chamber. She flew back to Soi Dog’s shelter in Phuket with volunteers Derek and Cindy after their month long stay volunteering in the flood relief. Noddy was also very ill when found with pneumonia and blood parasites. Noddy earned his name by nodding off in Cindy’s hands.

Originally Jason and Kookie were only adopting Noddy, however when looking at photos of Noddy they noticed a little black and white paw in the background. This was Sweet Pea! As they were being looked after together Jason and Kookie thought it would be a good idea to adopt Sweet Pea also so they could have some companionship. This turned out to be a good decision as the two are now inseparable.

Many thanks to Soi Dog’s supporters across the world for your ongoing support in saving dogs like Noddy and Sweet Pea. Happy endings like this are only possible because of you.

From everyone at Soi Dog may we wish you and your loved ones a very merry Christmas and all the best in the new year!

In Phuket, Thailand, Pammi, a four-month old pup refused to leave the grave of her mother, who had died and been buried under a tree.

Rescued by the Soi Dog Foundation, Pammi was then discovered to have parvo.  Thanks to the excellent vet care Soi Dog was able to provide, Pammi is improving now and gaining strength with every day.  She is expected to be fine and has a home waiting for her in Canada.

We wish Pammi a happy life!

To read more about Pammi and the other work of the Soi Dog Foundation, click here.