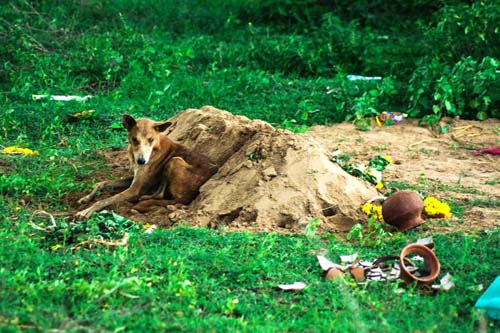 Dear animal lovers, we always hear stories about dogs sitting at their master’s graves or pining away for their lost human companion; tales that, because we know the wonderful nature of dogs, we have no trouble believing. However, the narration of such a story always brings tears to one’s eyes and a lump to one’s throat, and is always worth sharing.

Dawn Williams, our General Manager, is always rushing around the city on rescues. He is, in fact, our unofficial extra rescue driver and paramedic rolled into one at all times, attending to as many emergencies as possible once all our other ambulances have started their daily rounds.

Consequently, he rarely gets time to stop and look around, but, being a former commando in the Indian Army, he’s extremely sharp and observant.

Sometime during the 1st week of August, while on a rescue mission in Avadi along with our volunteer Mukund from Caterpillar, they were going through a police check post where traffic is necessarily slow. As they passed an open graveyard, they noticed a dog sitting on a fresh grave. Considering that neither the presence of a graveyard nor the fact that dogs sit around them is momentous, they passed through.

On the 13th of August, when on another rescue mission along with Capt. Avinandan Mithra of the Indian Coastguard and, coincidentally, Mukund again, they were driving past that check post when, lo and behold, the same dog was on the same grave. They took a picture from a distance and hurried on, as they were attending to a cow in distress.

After the rescue, they drove back to the graveyard and tried to coax the dog away with biscuits and water, but he would just whimper and put his head down, refusing to budge. There was a liquor shop near the graveyard so the three gentlemen went over to ask about the dog. From the owner of the liquor shop and the adjacent cigarette shop, they learned that the dog had been the constant companion of an 18-year old boy from the same locality who had been hit by a speeding motorcycle and died, on the 2nd of August.

Dawn went over to the house everyone said was the deceased boy’s and located the youth’s mother. The mother informed our team that she had assumed that Tommy, the dog, had run away when her son died. The mother of the young man accompanied Dawn back to the grave. When he saw her, Tommy got up and went slowly to her. It was obvious that he hadn’t eaten much (if anything at all) in days. Tommy rested his head on her feet and cried some more, as the mother bent down and, lifting his head up, kissed him, before burying her face against his neck and crying.

Dawn told me that he and the team were sobbing like little girls as they watched the two bereaved souls comfort and find solace in each other. The mother picked up Tommy and carried him back to her house, telling our team, as she left, that she had wrongfully thought, because her only child had died, that she had nothing to live for.

With the words that she still had one son in Tommy, she thanked our team and the two went back home.

This is only the tip of the iceberg, as far as the loyalty and love an Indian dog can provide is concerned. Visit our shelter and adopt a dog in need. Remember, they will never forget that you saved their lives, and they will never stop looking for a way to pay you back.

One thought on “Chennai, India: A mother finds another son”