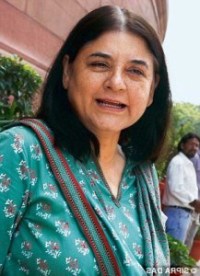 “There is no question of (linking rivers). There can be no scheme in the world as bad as this. Every river has its own eco-system, own fish, own PH value. If you connect one river with another, it will kill both of them. Don’t be in any misconception.” – Maneka Gandhi

Terming the ambitious river-linking plans of BJP’s prime ministerial candidate Narendra Modi as ‘extremely dangerous’, party MP Maneka Gandhi has said it was she who had stopped former PM Atal Bihari Vajpayee from going ahead with it.

The idea of inter-linking of rivers was floated during the NDA government headed by Vajpayee.

Replying to a question on linking river Gomti with Sharda at an event here last night, Gandhi, who is sitting MP from Aonla, said “I had stopped Atalji from this rubbish (Maine hi Atalji ko roka tha is bakwaas se). Such plans are…