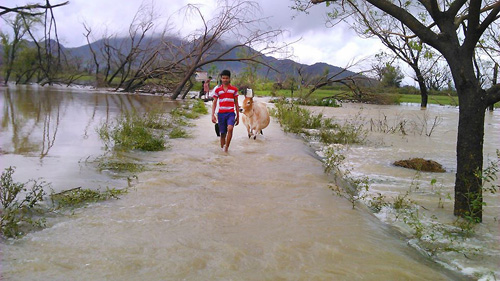 Fleeing from the floods.

The power has been down here since the area was hit by cyclone Phailin and the floods that followed; this has meant that we’ve had no way to communicate.

Most recently, we rescued more than 1,000 animals from severe flooding in the Aska block of Ganjam District, where three villages were cut off for two days by floodwaters. They were in great danger, but thank God, we were able to save them.

(The Ganjam District of Orissa is on the border of Andhra Pradesh.)

Thanks to all our volunteers and supporters, and with the help of local farmers, we were able to give the animals shelter, a safe place for them to rest, and food.

We’ve continued our work of repairing shelters, and we’ve been educating the owners in the care and adequate feeding of their animals, sometimes returning to the same sites three and four times, as needed. Having repaired more than 1200 shelters so far, we’re happy to see the animals now resting in a dry place, with proper food to eat.

We wish we could cover the entire flooded area of Odisha, but we do as much as we possibly can, as much as time and our finances will allow.  We are pleased that we’ve been able to help so many animals.