Opposition to the sacrifice grows

In the months running up to the time of the Gadhimai sacrifice, there has been a growing and very vocal opposition to the sacrifice, worldwide.

Baba Ramdev, a popular spiritual leader in India with a huge following, has spoken out against the sacrifice.

Dr. Chinny Krishna expressed his conviction that “this Gadhimai festival will be the last one to include any animals from India,” adding that “this year, there will be a major dent at least in the numbers of cattle.”

Buffalos, pigeons, goats, sheep, and chickens are also sacrificed. It is harder to catch and prevent the smaller ones from crossing the border. 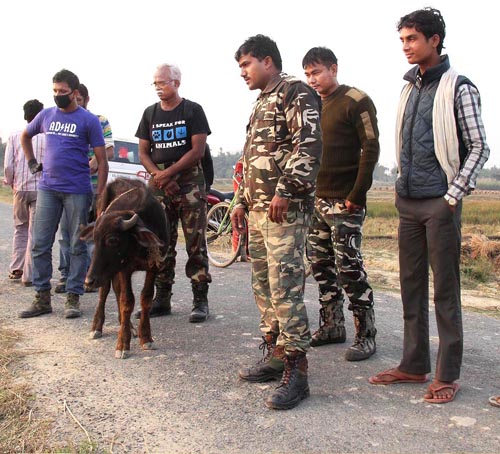 There have been no shortage of contacts with the Chief Priest of the Gadhimai Temple and with the Nepalese government, and these continue.

Rudra Krishna, of Blue Cross, has written, “A team from HSI-India consisting of its Chair, Dr Nanditha Krishna, Alokparna Sengupta and N Jayasimha, Managing Director, are reaching Nepal on Monday Nov 24, along with Ms Gauri Maulekhi – Consultant to HSI (who has been in Nepal fighting this case for the last few months) in yet another attempt to persuade the temple authorities to abandon this killing. We wish them all the best and our prayers are with them and the hundreds of thousands of innocent animals.”

The Animal Welfare Network Nepal (AWNN) has not rested over the past five years in their opposition to the sacrifice, spending time in the field, in the Bara District, where the Gadhimai Temple is, and also in meetings in Kathmandu. 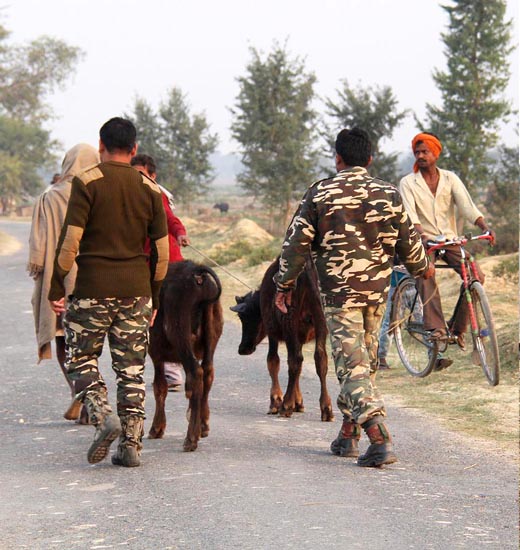 AWNN is working with the Department of Livestock in Nepal to set up an Exclusion Zone around the temple to prevent illegal entry of sick animals, those without permits, and those being transported illegally. They have also organized a large team of volunteers to help out along the border.

They have met with everyone possible; the Nepalese Prime Minister, the President, the Secretary of State, and representatives of the United Nations. They have been assured that there will be no government support from the Nepal government for the sacrifice. However, as of this moment, the sacrifice is expected to be allowed to go ahead.

Among a great many other measures they are putting into place, AWNN has organized Children’s Protests “with children asking for their right to grow up in a society free from violence and bloodshed.” AWNN is also setting up preparations to encourage alternate offerings to the Goddess of lotus flowers, and at Gadhimai Temple, a lotus flower garden is being created.

AWNN states, “Every single life we can save is a victory, and we will not stop until we have saved as many as we can.”

With so many groups and individuals working so hard with such great courage and determination, there is a sense that the momentum is on the side of the light, not the darkness, and that the time is drawing near when it will no longer be possible for the cruelty of the Gadhimai Festival to continue in years to come.

Finally, a word for those in the U.S.

It is hard not to notice a certain irony in the fact that the days of the Gadhimai sacrifice, November 28 and 29, are preceded, by just one day, by Thanksgiving. When around 320 million Americans sit down to Thanksgiving dinner, for the vast majority, there will also be a sacrifice, the death of a bird. There is an unmistakable similarity. Turkeys suffer at length throughout their short lives, and they are killed in numbers of a far greater magnitude than all the animals at Gadhimai. Let us say a prayer for all these innocent animals, while we do all in our power to prevent the sacrifice of any animals, anywhere, for any purpose.

In the late November cold, teams from Chennai and other Indian cities are camping out in the open along the Nepal/India border. They are there to stop as many animals as possible from crossing the border to become part of the horrifying scene of sacrifice during the Gadhimai Festival that takes place every five years, and which is due to happen on November 28 and 29, Friday and Saturday, of this week.

These brave volunteers work with the police and border authorities. The teams patrol between the police stations and border posts. They are not allowed to stop any cattle. Instead, they can observe and take photos and video, recording what they see. They report to the police any violations or any animals they see from India crossing the border. They will collect evidence.

In many places, the border crossings are three to five kilometers apart, so it can be easy for people smuggling animals to slip unseen past the border guards. The Nepal/India border is a remote area where conditions are harsh.

The police can confiscate or turn back animals being exported illegally. So far, hundreds of cattle have already been turned back from the border by the police, following tips from the animal advocates.

The Supreme Court of India intervenes

A suit related to Gadhimai was filed with the Supreme Court, in Delhi, by Gauri Mauleki, Trustee of PFA Uttarakhand (People for Animals – Uttarakhand) and Consultant to Humane Society International. On October 17, the Supreme Court issued a directive that all illegal movement of animals across the Indian border into Nepal, for the sacrifice at the Gadhimai festival, must be stopped by the police and the border patrol. Animals will not be allowed to be taken across the border.

Notices were sent out to federal authorities and to the border states of Bihar, Uttar Pradesh, Uttarakhand, and West Bengal to stop the flow of animals into Nepal. Around 70% of the animals sacrificed come from India so this is expected to greatly diminish the numbers of animals killed. Animal sacrifice is illegal in India.

In the past, although export of cattle and buffalo required a license, this requirement was simply ignored. Now, with the presence of so many volunteers assisting the police and documenting the movement of animals, the police cannot turn a blind eye, and action will be taken.

In issuing the ruling, Justice Kehar of the Supreme Court of India noted that the Gadhimai animal sacrifice is “demeaning and cruel.”

Major funding for this effort has been very generously donated by Kim Bartlett of Animal People News.

Dr. Chinny Krishna, Vice-Chairman of the Animal Welfare Board of India and Chairman Emeritus of Blue Cross of India, played a direct role in bringing together teams going to help along the border.

Fourteen volunteers from Blue Cross of India have gone, including Dawn Williams, Blue Cross’s General Manager, who regularly leads rescue teams on daring and difficult rescues in Chennai. More volunteers will join them over the next few days. Altogether, 25 volunteers from Chennai are in the field, from Blue Cross and FIAPO, bringing eight motorcycles with them. All-wheel-drive vehicles have been hired in Bihar.

They traveled by train. It’s a long trip from Chennai – 2,000 kilometers (1,242 miles). TVS Motors donated two of the motorcycles.

When there was a snag getting the motorcycles on the same train as the volunteers, the office of Maneka Gandhi, of People for Animals, and a senior Minister in the Union Government, intervened, and all was soon resolved.

Because of the extremely primitive conditions along the border, the initial thought of Blue Cross was that only men should go. This was met by charges of sexism, so the decision was reviewed, and it was announced that women are welcome to participate. Three women from Hyderabad are taking part, and part of their expenses are being paid by Blue Cross.

Another team has been sent to the Uttar Pradesh/Nepal border.

Speaking about the horrifying sacrifice of around 500,000 animals, which takes place in Bara, Nepal, around 100 miles south of Kathmandu, Dr. Chinny Krishna commented, “There is always a financial aspect.” The remains of the sacrificed animals; cattle, buffaloes, goats, pigeons, chickens, and rats, are already contracted to be sold to a Chinese company.

The festival was started in modern times, about a hundred years ago, by a man who was a convicted felon. Today, his grandson is the chief priest of the Gadhimai temple. This is the largest single sacrifice of animals anywhere in the world. Virtually every temple in Nepal does some animal sacrifice. The only one that does not is Pashupatinath Temple in Kathmandu which was founded by Adi Shankara, one of the greatest of all Hindu saints, who lived in the eighth century BCE and who was a strict proponent of the Hindu vegetarian tradition. The priests of Pashupatinath come from the south of India and would never perform any animal sacrifice.

Animal sacrifice is no more a part of Hinduism than witch burning is a part of Christianity. There are fanatics in every religion who propagate false teachings of violence and hatred. 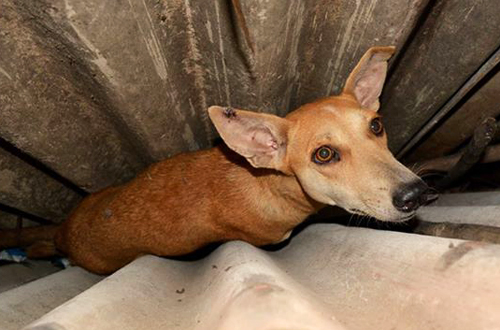 At around 6am on October 6, Mr. Dawn Williams, General Manager of Blue Cross, took a call from Mrs. Radha Rajan, a good friend of Blue Cross and a courageous animal advocate, about a dog trapped in a crevice. The dog had fallen from a roof and was stuck in between the asbestos walls of two huts.  Not well off, the people who lived there couldn’t afford to take down the walls of their house in order to free the dog.

The Blue Cross team arrived on the scene to find a really frightened dog, in a lot of pain and all set to bite anyone who came near. Undeterred, Dawn Williams wrapped his face in a cloth and was lowered down into the crevice head first, by two area residents holding on to his feet. It was a really tight squeeze, and the scared dog did bite just as hard as she could, while she was being rescued.

Once the dog was freed from the crevice, she suddenly realized that she’d been saved, and covered Dawn Williams with kisses in a very affectionate way – maybe partly as an apology for biting him. Both dog and human are safe and sound, and neither was seriously hurt.

This is one of Blue Cross’s many heroic rescues of animals in distress.

If you’d like to read more about Blue Cross’s work or help with a donation, visit their website here.