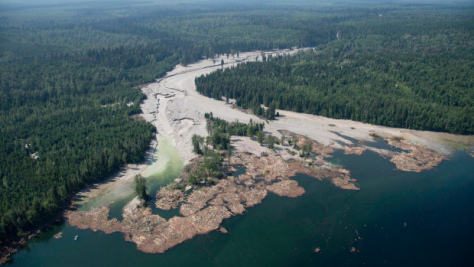 Contents from a tailings pond is pictured going down the Hazeltine Creek into Quesnel Lake near the town of Likely, B.C. on August, 5, 2014. (Jonathan Hayward/The Canadian Press)

Members of a B.C. First Nation are speaking out against the province for allowing the Mount Polley mine to drain effluent from a tailings pit into Quesnel Lake.

Secwepemc Nation spokesperson Kanahus Manuel is outraged by the province’s decision, and worried for the people who use Quesnel Lake.

“This effluent and this treated water that Imperial Metals is discharging into Quesnel Lake is not meeting the drinking water guidelines,” she says. “It is going to be flowing right down into the Fraser River which 63 per cent of B.C. depends on for our watershed.”