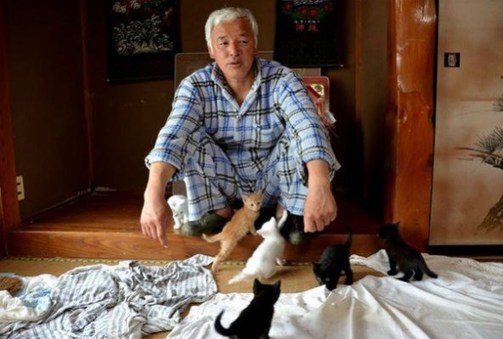 Naoto Matsumura has refused to leave the radioactive town of Fukushima, Japan in order to take care of its abandoned animal residents.

Fukushima was evacuated in 2011 after an earthquake and a tsunami caused a radioactive meltdown from its nuclear power plant.

Approximately 30,000 residents left the town, leaving behind their animals, including pets and livestock.

Matsumura, a farmer, had initially fled with his family, but because it was difficult finding adequate accommodations, he decided to return to Fukushima. It was upon his return when he realized the town’s animals had been abandoned and were in need of much-needed care. Animals had starved to death in their barns, or chained up without food or water.

“I had no choice but to stay,” Matsumura told Vice. “I couldn’t leave the animals behind. They needed to be fed.”