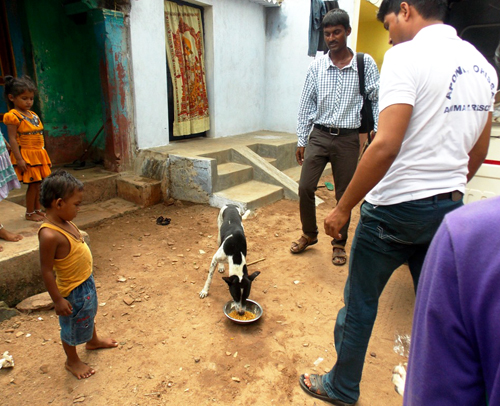 On behalf of the APOWA Team,

APOWA’s Disaster Response team is working to help the animal survivors of the devastating cyclone and flood in Odisha. Our team has been working relentlessly since the cyclone ‘Phailin’ hit the Odisha coast on October 12, 2013. The footprint of the cyclone is huge and immeasurable.

One of our teams, headed by Dr. Laxman Behera, reached Pallibandha in the Ganjam block of Ganjam district, a village with a mostly homeless dog and feral cat population, already struggling to survive before the cyclone. We helped 64 distressed animals by providing food, water, and treatment.

APOWA is a non-profit organisation that mobilizes volunteers and resources for animal victims. 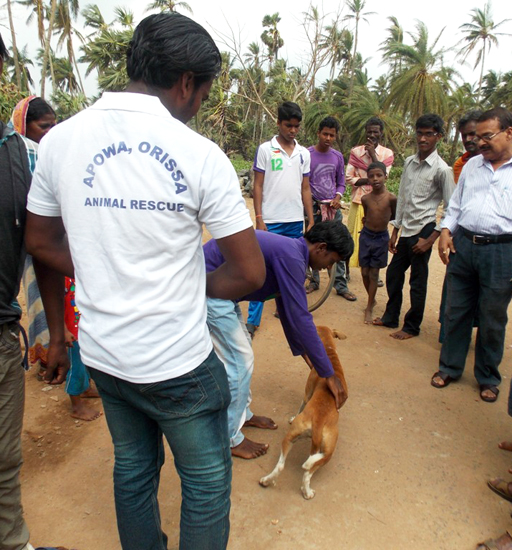 A volunteer helps an injured stray dog, about to be treated by APOWA’s vet doctor, Dr. Laxman Behera, at Pallibandha village in Ganjam district.

Injury and disease are always common following a severe cyclone, whenever saltwater pours into a seaside village.

Our team rushed to Purunabandha, a seaside village in Ganjam district, severely affected by the cyclone. Mr. Bichitra Biswal and Mr. Sukumar Parida, along with two other volunteers, gave emergency feeding to stray dogs, cats, and cattle. Meanwhile, Mr. Subhajyoti Panda and Mr. Rabindra Sahoo assisted Dr. Behera with the treatment of animals. 59 animals were treated by the team in this village.

We bring food to many cattle roaming in cyclone-affected areas.

A surviving feral cat walks along a street in Purunabandha village.

It was another long working day for our team at Binchanapalli in the Palibandha Panchayat of the Ganjam block of Ganjam district. Our work is saving lives through emergency feeding and treatment efforts; we’re giving the most vulnerable animals a chance to get back on their feet in this emergency situation. Over 83 animals have been treated for fevers, coughs, and injuries.

These rescued dogs are so happy to eat, they have no problem sharing their food.

Cows are roaming the streets in cyclone-stricken
parts of Ganjam district. One of our volunteers is providing emergency feeding.

After the cyclone moved along the Odisha coast on October 12, 2013, it left both people and animals feeling insecure and unsettled.

“Animals are the most innocent and helpless victims of this catastrophe,” said APOWA’s vet doctor, Dr. Laxman Behera. “They are frightened, injured and hungry. We are providing veterinary care, as well as emergency feeding and planning for vaccinations and measures to prevent a disease outbreak.”

Because of our past disaster response experience, we now have in place dedication and commitment to hard work, and an understanding of what is needed to deal with the situation. Combined with our genuine love for the animals, our teams will be in place until the situation improves. There is still flooding and anguish in most villages. People’s frustration is running high in affected areas.

For more information or to help APOWA’s flood relief work with a donation, visit the website of Help Animals India.