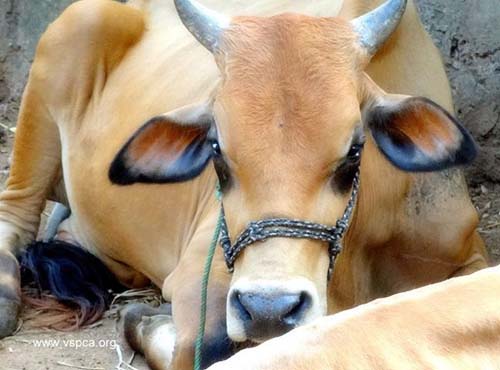 This bull was brought from a village in Vizianagaram, Andra Pradesh district headquarters, to the Simhachalam Temple in Visakhapatnam. The village people brought him to the temple to be blessed so that they could take him back later as a sacred bull, called “appanna” in Telegu.  Their intention was that he would then be released in the village, where he would live peacefully in freedom, wandering where he wished, fed by the villagers, and in return, sharing God’s blessings with the people.

A great many bulls and calves are brought, in this way, to the Simhachalam Temple as offerings, but they are not always as safe as the villagers hope.

Visakha Society for Protection and Care of Animals (VSPCA), who, for a number of years, has kept an eye on the calves and bulls offered to the temple, caught wind of negotiations underway with butchers to buy the bull for Rs 8,000 (U.S.$ 200).

They immediately obtained custody of the bull, brought him to their shelter, investigated the facts of the situation, and then signed an adoption agreement with the village authorities to ensure his protection in the future.

Now he has been released back in the village where he belongs, where he’ll be loved and cared for, and will shower the village with divine blessings – following in the tradition of India’s long reverence for the bull and the cow.

To learn more about the work of VSPCA and other Indian animal organizations, or to donate, visit the website of Help Animals India.