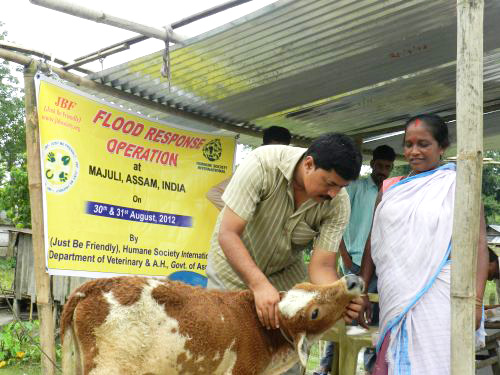 Assam, in the northeastern corner of India, was hit in July by the worst floods in a decade, affecting 2800 villages and more than two million people.

The flooding of the Brahmaputra River killed over a hundred people and also killed many wild animals in the Kaziranga National Park.

The Assam-based organization, Just Be Friendly, writes, “Though the floodwaters have receded now, the aftermath of the devastating floods still continues to haunt the people of the region.”

There is a scarcity of fodder for the cows, and the people, who have lost most of their belongings, are unable to feed them.  Some cattle were washed away in the floods; the surviving cattle are also suffering from flood-caused diseases.

On August 30 and 31, the group Just Be Friendly, in association with Humane Society International, carried out a two-day relief campaign, “Post Flood Response Operation,” on the island of Majuli, educating people about the effects of the floods on cattle and distributing free medicine to treat the cows. Mujuli is the world’s largest river island.

Leaving from Guwahati City, before dawn at 5 am, the team, consisting of the team leader, three vets, and two animal handlers, in a truck packed with supplies and medicines, crossed the Brahmaputra on a ferry. They notified authorities in Jorhat about their work, and held a meeting with the Majuli Veterinary Department as soon as they arrived, then split into three groups to conduct camps in three different locations on the island.

The three teams found that many of the roads were washed out. Muddy, nearly impassable stretches made traveling tough and hazardous.

At the first camp, held at the village of Karatipar (20 kilometers or 12 miles from base camp), they held a gathering, explaining to people the nature of the cattle diseases and the treatments that would help the cattle, and distributed medicines for 3,000 cows and buffalos.

25 kilometers (15 miles) from base camp, the second camp was held for another 3,000 animals at Salmara and Basamora.

The third camp, held for 1500 animals, took place at Sonowal and Kachari villages, 45 kilometers (27 miles) from base camp.

The next day they got an even earlier start, at 3 am. Twenty team members, with all their supplies, got into a small motor boat called a “bhutbhuti” and headed for a sandbar where they would hold a gathering. However, the water was full of obstacles. After half an hour making their way through the debris, they arrived and were struck to see 5,000 cows roaming about on the sandbar.

They held the awareness camp and distributed the medicines. The Veterinary Department of Majuli had also brought along medicines to hand out.

The people, who were struggling with their losses, were having a hard time coping with caring for the cows and most had little idea what to do. Simple instructions and guidelines, given along with medicines and food supplements, offered people a handle on where to start and how to help the animals. Everyone was grateful and very attentive.

Finished by noon, the team left, and in the afternoon, on their way back, met with authorities in Jorhat, reporting that all had gone well.

The team members’ hard work and dedication meant that many thousands of cattle who might otherwise have succumbed to disease, will now have a much easier time staying well and recovering from the floods.

Dr. Sashanka Sekhar Dutta, of JBF, expressed his heartfelt thanks for the financial support and coordination of Humane Society International and for the teamwork of everyone involved; the Veterinary Departments of the Jorhat District and the Government of Assam, local vets and their assistants, and many volunteers from Majuli.

It was a great start, but much more remains to be done, and the cows of Majuli will need continuing food and vet care in the weeks ahead.

If you’d like to donate to help with the relief work of Just Be Friendly. Click here.

To visit the Facebook page of Just Be Friendly, click here. (Caution some of the images are graphic.)

Photo: Courtesy of Just Be Friendly