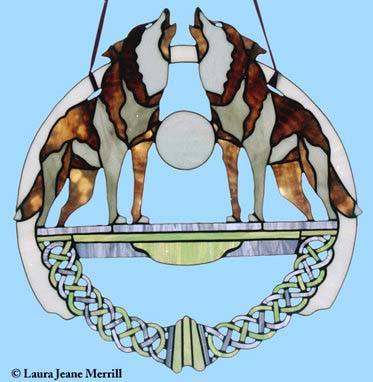 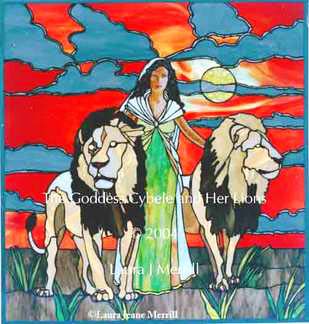 The Goddess Cybele and her Lions. There is no lettering on the original art work. 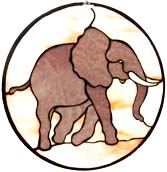 Most of the stained glass work has been sold over the years, but a few remain.  When they are all gone, there will be no more.

Laura is now writing a series of books about trees, Secret Voices from the Forest.

To learn more about or purchase Volume One of Secret Voices from the Forest, click here. 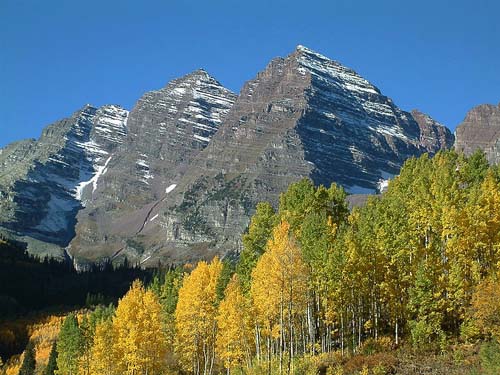 Did you know that quaking aspens are not separate trees, but are instead whole colonies of trees?  They are all connected underground through the same root system. The largest colony near Fishlake, Utah, may be 80,000 years old and covers more than 100 acres.

These aspens are lovely trees, fluttering in the breeze, a beautiful gold color in the fall.  Through a process called “phytoremediation,”  these and other plants can detoxify their surroundings by internal processes which transform harmful chemicals into less harmful ones.  Of course, it’s best if we don’t put harmful toxics into the air, water, and soil in the first place, but a lot of damage has already been done, and natural ways to help clean it up are a good idea.

One of the most remarkable aspects of Laura J. Merrill’s Secret Voices from the Forest is that it gives trees a voice, relating to them as conscious beings.

The book is organized according to eco-systems. Volume One: the West, the first of four volumes (the three others are yet to be published) highlights eleven species of trees, and a twelfth category, Old Growth Forests.  Each tree is described in detail, has a section in which the tree “speaks” to us, and then the birds, animals, and other plants that surround the tree also appear.

As well as enlightening, little-known scientific facts, and the inspirational words “spoken” by the trees themselves, also included are poems by Brian R. Mitchell. 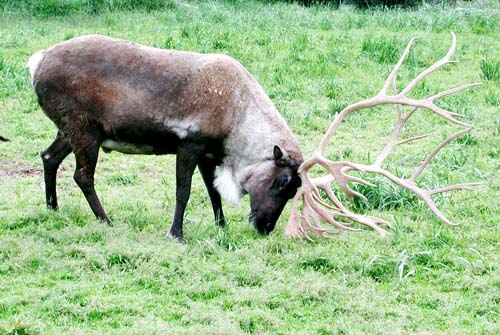 A male caribou in Alaska

Since Christmas is approaching, here is another fact that may have eluded you.  In caribou, the American name for reindeer, both the males and the females have antlers.  And, as we all know, Santa’s reindeer do have antlers.  However, male reindeer lose their antlers in the winter, so Dasher and his friends, though they all have male names, must really be female reindeer, who still have their antlers in the winter.  So, when you hear their hooves prancing across your roof on Christmas Eve, remind yourself that they are female reindeer, hard at work helping Santa deliver the gifts.

Along the Pacific Coast Ranges and the Great Basin can be found the Mountain Mahogany, and among this tree’s companions are kit foxes, very small cat-like foxes that can be observed sometimes at twilight darting across roads.  Another mountain mahogany companion is the Golden Yarrow that ancient people used to stop bleeding and that also attracts butterflies.  At the archeological site, Shanidar IV, in Iraq, dating from around 60,000 BC, yarrow was one of many herbs found there, as part of a Neanderthal flower burial.  So if you were wondering what Neanderthals were doing around 60,000 BC, they had already learned to use medicinal herbs. 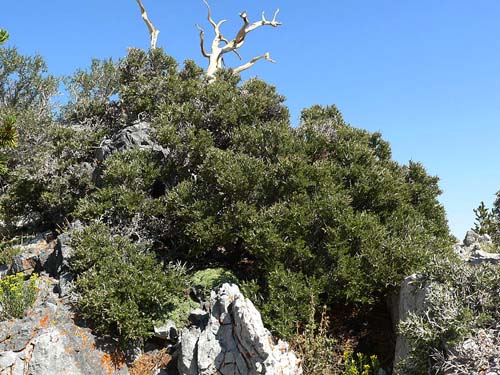 The Mountain Mahogany is part of the Rose family, which of course isn’t just roses, but also includes three thousand known species of herbs, shrubs, and trees, including a great many common fruits, like apples, pears, almonds, peaches, apricots, plums, cherries, strawberries, blackberries, and raspberries, as well as the flowers we know as roses.  Who would have guessed?

This beautifully designed and illustrated book is filled with fascinating lore about trees and the eco-systems that surround them, and how the plant and animal species interrelate with each other.

From time immemorial, in all places and at all times, trees have formed a bridge linking us, as humans, to the sacred. This has never been more true than in the present time, when even as trees and forests are under threat, and so many have already disappeared, this does not make the existence of trees less important, but more significant than ever.  Trees are key to all life, and if we wish to enable all plants and animals, and all of nature, to thrive on the earth, as well as ourselves, trees are a good place to start.

To order Secret Voices from the Forest, Volume One, the West from Amazon, click here.

Second photo: Author: Laubenstein, Karen – U.S. Fish and Wildlife Service / “This image or recording is the work of a U.S. Fish and Wildlife Service employee, taken or made during the course of an employee’s official duties. As a work of the U.S. federal government, the image is in the public domain.” / http://en.wikipedia.org/wiki/File:Caribou_using_antlers.jpg / Wikimedia Commons / Caribou in Alaska using antlers [1]