Thank you to N.G. Jayasimha, H.S.I., for this information.

Particularly, Nestlé’s new policy states that it will eliminate practices like confining pigs in gestation crates, calves in veal crates and egg-laying hens in cages; the forced rapid growth of chickens used for meat products; and cutting the horns, tails and genitals off farm animals without painkiller.

“We thank Nestle for taking a stand against inhumane factory farming practices,” said N.G. Jayasimha, director of HSI India. “Cruelly confining animals in cages for their entire lives, castrating or removing their tails or horns without painkiller and breeding them in a way that compromises their welfare is simply unacceptable.”

Nestlé is also encouraging food sustainability by promoting the global Meatless Monday movement via on-package messaging for some of its products. 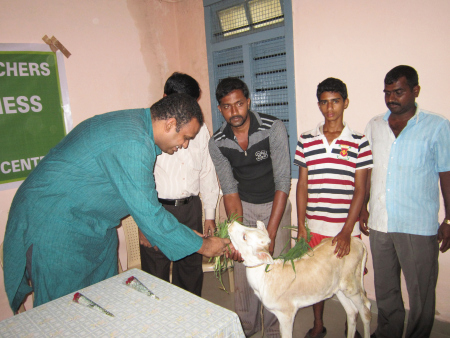 Prashanth Krishna, the CEO of Kindness Kids, made friends with a calf at the beginning of an orientation workshop for teachers attending the launch of the Kindness Kids program in Mysore, Karnataka, on November 7, 2012.

Kindness Kids, a project of the C.P. Ramaswamy Aiyar Foundation, sponsored by the Winsome Constance Kindness Trust, Australia, fosters compassion towards animals in school children, giving them an insight into the harm done by factory farming to both animals and the environment, and encouraging a vegetarian diet.

First the teachers are given an overview of the program and its aims so that they will be able to teach the students effectively.

Last August, in Bangalore, 85 teachers from 20 schools attended a similar workshop, preparing them to guide their students toward greater sensitivity and understanding of animals. The Kindness Kids program is also well underway in Chennai, Tirupathi, and Hyderabad, reaching thousands of children with the message of kindness to animals.

A rooster and a hen.

On Monday, June 18, the U.S. Senate declined to take a vote on the Egg Products Inspection Act Amendments of 2012 (S. 3239)  The bill is pending in the House and may still come up for a vote.

It is believed by congressional experts that the bill has only a very slim chance of being passed into law.

The presence of the bill in congress does serve the purpose of highlighting the plight of the 300 million or so chickens who currently live their lives confined in battery cages in the U.S.

One – That each hen have a minimum of 124” of space (for white hens) or 144” of space (for brown hens, who are larger). (This may not sound like much, but it’s more space than hens are currently allowed.)

Four  — Require labeling that reflects that actual conditions in which the hens are kept, such as “free-range”, “cage-free”, “caged”, “enriched cages”, so consumers of egg products can make informed choices.

Five – Prohibit withholding of food and water, which is currently employed as a method of increasing egg-laying production.

One of the most controversial aspects of the bill is that it would pre-empt any state or local regulations, present or future, which would require more living space for each egg-laying hen, thus effectively forestalling any further legislative action to give hens more space.

No future laws could require hens to be given more space or to be free-range.  The cruel system of factory farming with battery caged hens would be enshrined in federal law in the U.S. for the foreseeable future.  Battery cages could not be banned in years to come.

On other hand, the bill’s supporters argue that the likelihood of battery cages being banned in the U.S. any time soon is around zero, so any improvement, even if minimal, in the lives of the hens would be a good thing.

Here are a few varying perspectives on this bill:

Photo: Andrei Niemimäki from Turku, Finland / Wikimedia Commons / “This file is licensed under the Creative Commons Attribution-Share Alike 2.0 Generic license.” / A rooster and a hen.